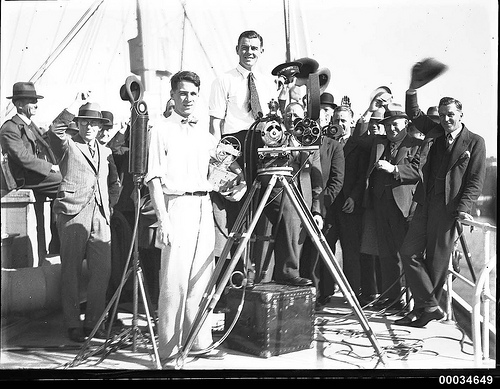 This photograph depicts a group of men and a film crew on board SS
SIERRA. The photograph was taken in August 1929 at Circular Quay
during the welcoming and celebrations of the arrival of Australia's
first Movietone News truck.

Determine exact details about a film, including the release date, by using the Internet Movie Database or the All Movie Guide.

Film reviews can be found in the following databases. Log-in required when accessing from off-campus:

Films in the Library

Students can check out DVDs from the Library, using their student ID card.

These brief documents show the EASY way to search for movie reviews in LexisNexis Academic
and Academic Search Complete.