The Story of the Female Yeomen during the First World War Women in today's military answer their country's call in all services and ranks. Until World War I, however, the military establishment did not officially accommodate women who wished to serve. Some women had to dress like men to fight in the field, and others risked their lives as frontline nurses, but these brave women were not recognized by the military.

Stars and Stripes -Women and the War Effort 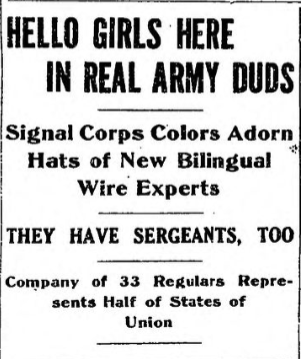 World War I was the first war in which American women were recruited to serve in the military. Women were already present in France as members of the American Red Cross and as canteen workers, but for the most part, French and Belgian women staffed American military offices. In October 1917 the new American Expeditionary Forces (AEF) telephone system was put in place, but the American soldiers and the French women working as telephone operators were unable to communicate. The need for bilingual telephone operators precipitated the recruitment of American women. 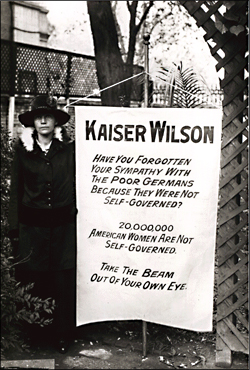 During World War I, militant suffragists, demanding that President Wilson reverse his opposition to a federal amendment, stood vigil at the White House and carried banners such as this one comparing the President to Kaiser Wilhelm II of Germany. In the heated patriotic climate of wartime, such tactics were met with hostility and sometimes violence and arrest.

Medical Women at War of Britain 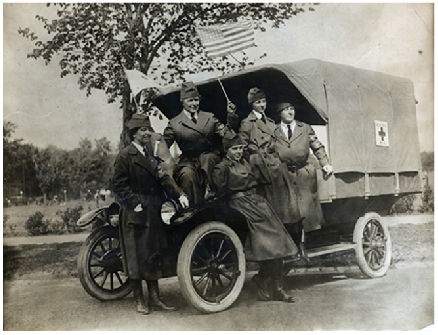 Women were encouraged to pursue medical education in order to fill the vacancy of doctors as men went to the front.  The British war office did not allow women to serve as doctors; so many women offered their services to other allied governments.

Chemical Warfare and Medical Response During World War I 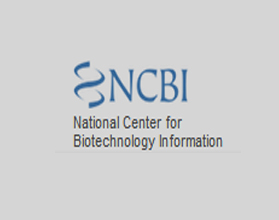 The first large-scale use of a traditional weapon of mass destruction (chemical, biological, or nuclear) involved the successful deployment of chemical weapons during World War I (1914–1918). Historians now refer to the Great War as the chemist’s war because of the scientific and engineering mobilization efforts by the major belligerents. The development, production, and deployment of war gases such as chlorine, phosgene, and mustard created a new and complex public health threat that endangered not only soldiers and civilians on the battlefield but also chemical workers on the home front involved in the large-scale manufacturing processes. The story of chemical weapons research and development during that war provides useful insights for current public health practitioners faced with a possible chemical weapons attack against civilian or military populations.

"If You Want to Fight, Join the Marines": This World War I poster relied on a pin-up to catch men's attention.