Many libraries, museums, and archives have digitized their historic documents and have placed them online in digital libraries.  This page includes links to some large collections that may be useful in your research.  Contact Cheryl Hoover if there is another excellent digital library that should be added to the list. 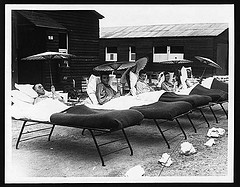 Image Info: 5 soldiers recuperating in the sun during World War I circa 1918. From the National Library of Scotland's Flickr photostream.

Primary Sources on the Web