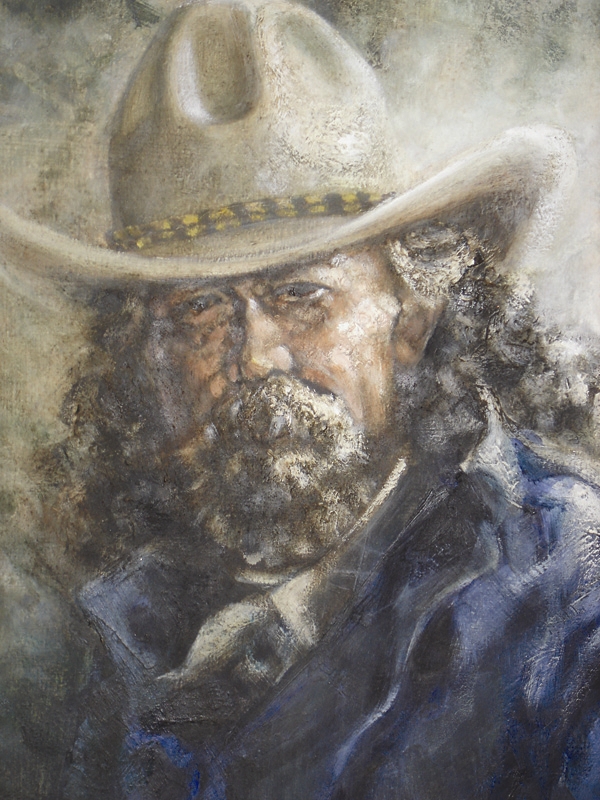 Nineteen publishers rejected 's first novel, Carry the Wind, before it was printed in 1982.  However, this first novel was to gain the honor of receiving the Western Writers of America Medicine Pipe Bearer's Award for best first fiction.  is known for his eye for historical detail, and he is a stickler for accuracy.  He is known for traveling and exploring down known and unknown dusty roads during the hot summer months, and traversing slippery, muddy roads and hiking through snow to stand upon a historical sight that he would tell his readers in an upcoming book.   "Parking in the lower lot, I trudged up the hill to reach the spot where Colonel   John Gibbon's infantry waited out the last hours before their attack on the unsuspecting camp . . Standing there in the icy snowstorm I was totally overwhelmed by the sight of those skeletal cones of lodgepoles standing stark against the low, gray sky . . ." Some of the sites that he would stand upon were known to the world like the Little Big Horn Battlefield and others would be obscure to the average reader like the Weippe Prairie north of Lochsa.  He is known to combine "a roaring good tale with fascinating insights into the lives and times of his principal characters, generally managing to employ his extensive knowledge to enhance a story rather than intrude upon it" (Whitehead, 1991).   would say that he considered himself "not a literary writer but a storyteller."  His desire was to reach and teach thousands if not millions of readers about the early western frontier.

He accomplished part of this goal, not only through his books, but through discussions given to elementary children, lectures at symposiums, and historical one-week tours "during which you will re-live the grit and blood, the tears and tragedy of the great Indian Wars."  He would blend historical fact with human emotion to re-create the past during his historical tours each summer.  One presentation he gave to a fourth grade class was about the Plains Indian culture. He held a discussion with a Honors English class in Castle Rock middle school about "research, writing, and editing that goes into producing two historical novels each year, when compared to their "term papers."  He gave keynote speeches at seminars and lectures at symposiums.  He traveled all around to sign books for fans, and he signed the books at the local Albertson's in each town.  He held radio interviews that "took me into cities, talking before audiences, I never would have managed to reach otherwise."

He is known for his mountain man/fur trapper books of the early western frontier.  His mountain man series began with the original trilogy to only go back and write a prequel of three books and then to finish the series with a trilogy sequel. knows that the mountain man/fur trapper is an important part of our history, and stated, "Call it manifest destiny, call it what you will – the Americans had come to trap and map, lay their traps and eventually conquer all of what lay between the and the far Pacific."  His central character of the Mountain Man series, Titus Bass, has come to capture the attention of avid readers from all over the world.  Titus Bass is a mountain man, trapper, explorer, Indian fighter, and survivor.  Titus is a crude unkempt mountain man who loves to drink, buy a night of romance, but he is also a staunch friend who is generous and fair in his business dealings.

wrote another extensive series called the Plainsman series, which contains 16 books.  The main fictional character within this series is Seamus Donegan, who is placed within different battles and confrontations throughout the series.  He is involved within the Fetterman Massacre, Hayfield Fight, , Summit Springs, Modoc War, Southern Plains Uprising, Red River War at Battle of Adobe Walls, Buffalo Wallow Fight, and , Great Sioux War at , Rosebud Creek, Battle of Slim Buttes, Dull Knife Battle, and the of the .

The Sons of the Plains series is based upon Custer.  It starts with a Civil War hero who is leading his 7th Cavalry south into and the confrontation that ensues, along with the storyline of Custer becoming smitten for a 17-year-old princess.   The second book, which is based upon archeological evidence and long-ignored recollections of warriors, is a woven, tragic tale of Sitting Bull and Custer's collision on the Little Big Horn battlefield.  The third historically accurate book focuses on the Sitting Bull's disintegration within as seen through the eyes of Custer's half-breed son, Yellowbird.

The Jonah Hook Trilogy is based upon a Confederate POW whose only way out of prison is to become a Union soldier, and where he is subsequently sent to a Western post.  Upon his returning home, Hook discovers that fanatical Mormon zealots have taken his family prisoners.  He must head west again.  The second book finds Hook traveling from to in search of his sons that have been "rescued" by Comanche.  It will end with a showdown between the Texas Rangers and the Kwahadi Comanche.   The third book focuses on the fateful rescue of his wife from the Mormon leader Jubilee Usher.  It is a story of enduring love and a man's determination to reclaim his wife.

lost his life to cancer in March of 2001.    He will be remembered for being a natural storyteller with authentic characters along with the strong dedication to accurate and reliable portrayals of the American west.  One fellow writer stated," He brought the West alive for countless of readers, and his worldwide popularity directly benefited all Western writers as well as setting a standard for excellence."